Our last stop was Paris, France.

we stayed at Apartments de Louvre – St Honore.  They were a block from the Louvre and close to the train station.  Just north of the Louvre and to the right of our apartment we found a vibrant bohemian area we would like to explore more.  We walked around the Louvre grounds and underground shopping.  We snacked on cheese, bread and wine (Cotes Du Rhone). 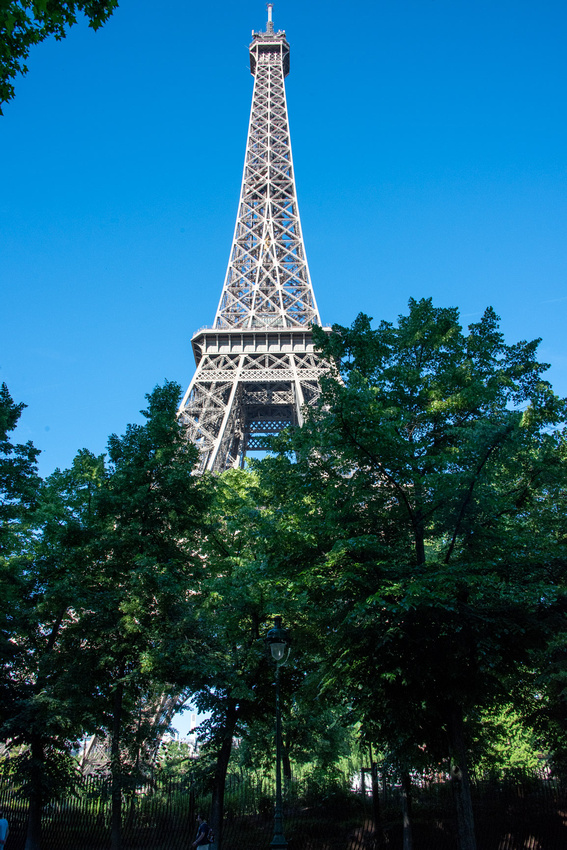 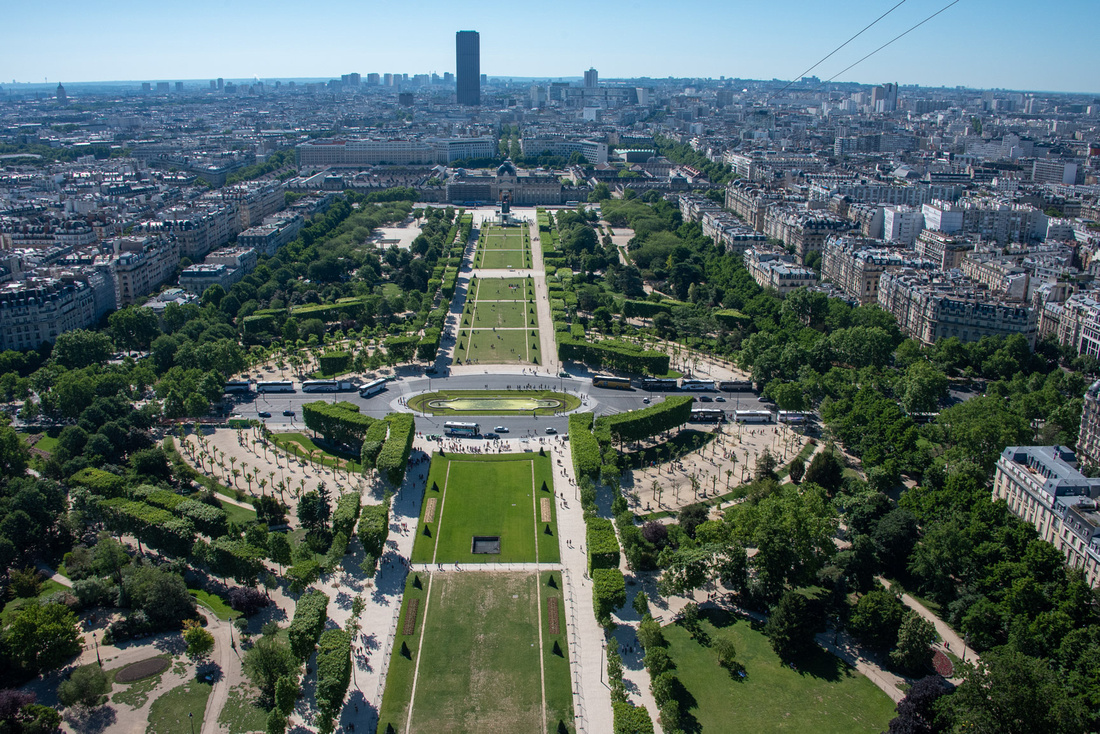 The next morning, we got up and headed for the Eiffel Tower.  We had a ticket to the top, a boat ride along the river Seine and a walking tour of the city which would have included the Cathedral of Notre Dame had it not just caught fire.  Our guide was Eric from ParisTour1.  Eric worked hard to make sure we got to see as much as possible on our tour.  The Eiffel Tower was late in opening and actually closed to the top that morning, but Eric made us feel that was not a problem. He was able to squeeze in many unexpected sites as well as give us additional details only a local would know. We walked into the Latin Quarter and tasted both savory and sweet crepes. We learned not only about architecture (both Roman and gothic), history, and food but also some about the personalities and lifestyles of the French.  It felt like our own personal tour but at a group tour price! 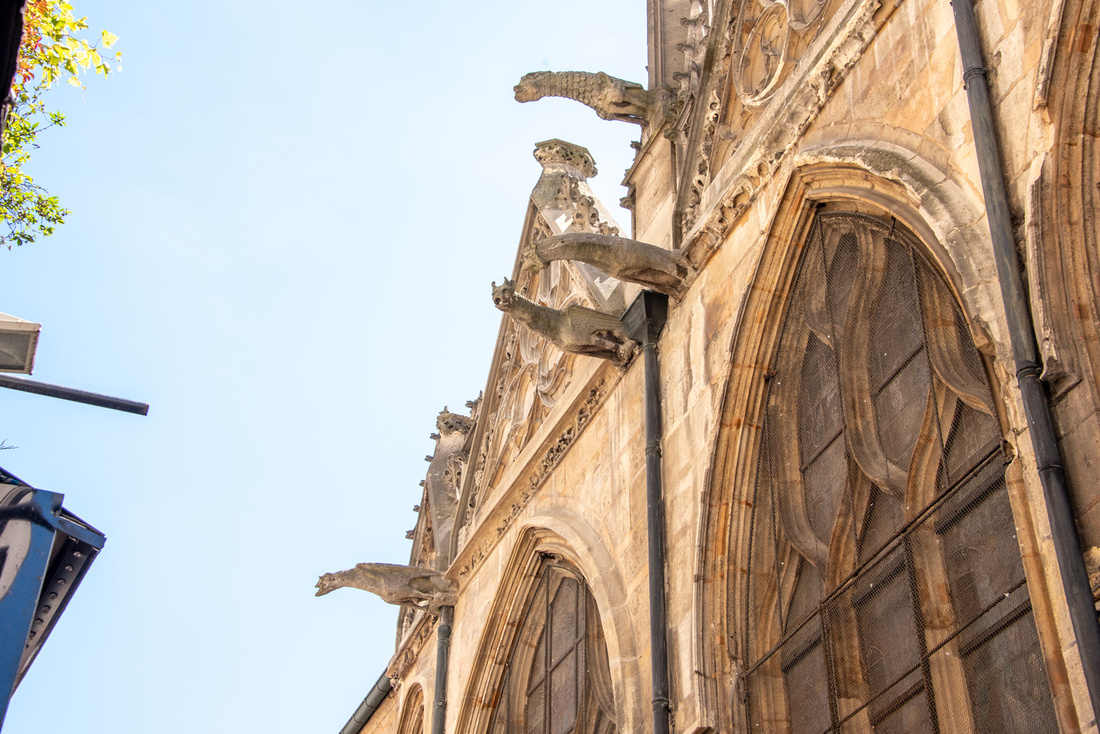 In the Latin Quarter we learned that the streets that drained in the center of the street had dumping and draining issues.  The Gargoyles had holes in them, and dirty water was sent out into the street by these holes.  The should it made was a gurgling sound thereby giving the gargoyles their name.  People passing below were warned of the oncoming water with the a called something like Luvolou, Luvolou, Luvolou.  The word “use the Lou,” is said to come from.

We also saw the Police building that still carries the bullet holes from World War Two.  We also learned the Fleur de Lis was the symbol of Royalty and therefore not very popular.

We visited the Sainte Chapelle, filled with beautiful stained glass.  It was amazing to think of all the royalty that once stood in the same place we were.

On the third day, we purchased tickets to the Louvre Museum.  We had learned from Eric it was over 9 miles long and would take 25 days to see all the art in the museum.  Therefore, we decided to see the highlights and come back again some time.  These are some of what we saw:

After our tour at the Louvre, we decided it was time to give our feet a break, so we hoped on a Red Bus and toured the north end of the city by the Moulin Rouge and Montmarte.  We also rode around the Arc de Triomphe, the Modern Museum of Art and along the shopping area of Champs-Elysees.

We ended our day with dinner on a riverboat along the Siene.  Dale had Escargo and Steak Tartar.  I had Salmon.  We took a late night cruise along the river again and then took pictures of the Eiffel Tower lite at night, other statutes and the Louvre.

We began our day with a French breakfast near the Museum D’Orsay.  The building was an old train station that had been converted in to an art museum.  There we saw the works of:

Claude Monet (he loved the light and painted 60 prints of the light in a cathedral which all but 6 are around the world.  He loved his gardens and painted a lot of them.  In the end he was going blind and it seems his painting reflected this

Vincet van Gogh (stories of his ear are that he cut it off because his friend was leaving or that they got into a fight and  Gauguin cut off his ear by accident and van Gogh did not want him to get into trouble.  His death is said to be either a suicide or that kids stabbed him, and he did not want them to get in trouble so he did not tell anyone.)

We walked behind one of two of the clocks in the building and looked out at the city.

Last we saw an exhibit on black art in France.

That evening we headed up to the Moulin Rouge.  What a wonderful show.  We had fish for dinner and champagne.  Our show included singing, dancing, and wonderful costumes.  There was a juggling act, a balancing act, a lady swam with pythons in a big water tank, 6 miniature horses and a roller-skating act.  It was a wonderful show that we really enjoyed.

It was our last day and we prepared to head home.  We headed out for one last breakfast in Paris and then to the subway for a ride to the airport.   By the time we got home we had almost been up 24 hours.  We were exhausted but we cleaned out our suitcases and went to bed.  What an amazing trip!!